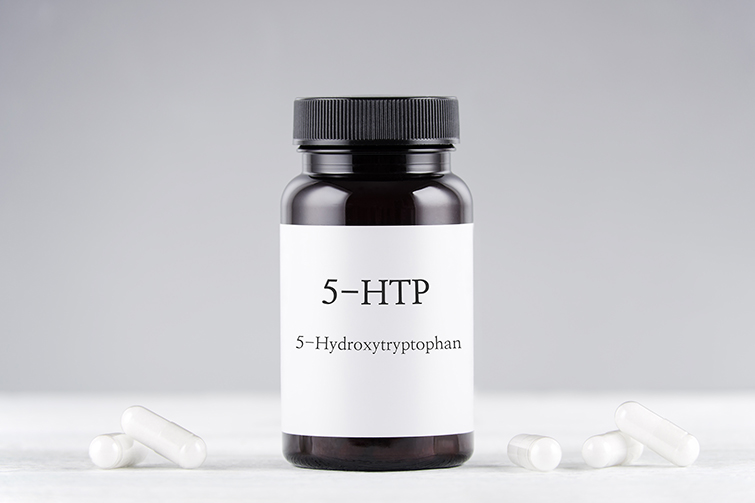 Many people suffer from depression. Those who try SSRI medication and struggle with effectiveness or side effects may stop taking it. Could 5-HTP, an OTC supplement that also affects serotonin, be a way to diminish symptoms of depression, anxiety, and bipolar disorder? Is it a workable treatment for depression?

5-HTP (5-Hydroxytryptophan) is a compound produced in the body from the amino acid tryptophan, an essential amino acid. It is a precursor to the hormone melatonin and a metabolic intermediate in the biosynthesis of the neurotransmitter serotonin.

It carries signals between nerve cells in the brain, helping to regulate a variety of functions in the body, including mood, behavior, and attention. By increasing serotonin levels in the brain, emotional balance can often improve.

At first yawn, thoughts of a sleep aid come to mind with the mention of melatonin. Although it’s the serotonin that shows signs of being beneficial for behavioral health conditions – particularly depression, anxiety, and bipolar disorder.

5-HTP is made from the seeds of an African plant, Griffonia simplicifolia. Studies of dietary supplements, available in tablet form, have shown the ability to increase the amount of serotonin available to the brain. It is available as an OTC in the United States, and as a prescription medication in many European countries for mental health professionals to treat conditions.

Depression is often complex to treat. Often, multiple medications are tried to find what works best for a person’s particular brain chemistry, monitoring permutations created by each Rx treatment.

The reason for the difficulty with diagnosis and treatment is a matter of scope: the spectrum of depression is much wider than what is reflected in the current diagnostic nomenclature. A large portion of those with mental illness, including both those in treatment and people in the community, don’t meet the criteria for either major depressive disorder or dysthymia. Individuals may be suffering from these mood disorders, though their symptoms may appear less clinically significant. It’s those suffering that find their problems extremely troublesome.

Studies show that 5-HTP may work as well as medications in the selective serotonin reuptake inhibitors (SSRIs) class of antidepressants to treat people with mild-to-moderate depression.

In side-to-side comparisons, 5-HTP increased the levels of serotonin in the brain as much as many of the most prescribed SSRIs. The test subjects given 5-HTP supplementation also experienced fewer side effects than the SSRI group. Studies have also found that 5-HTP worked better than placebos at alleviating depression symptoms.

While most of the available clinical trials had smaller numbers of participants, their indications were encouraging. Larger population evaluations will be useful to further confirm broad efficacy and indicate which types of depression this chemical benefits most.

Is 5-HTP an Option for Therapists to Recommend for Depression?

The research to date appears to show that 5-HTP is a viable option for therapists to recommend to patients with indications of having low serotonin levels. Conditions correlating with this include:

This is particularly encouraging for people who are patients who experience resistance to antidepressant medications, either finding the pharmaceuticals ineffective or the side effects too

Another attractive attribute of 5-HTP is the reported relief from its relatively fast-acting serotonin increase. Prescription antidepressants and medications often take weeks or months

before patients start to experience positive effects. This is due to 5-hydroxytryptophan metabolizing in the system quickly, improving serotonin levels rapidly.

It is noted that people who are taking antidepressant medications should not take 5-HTP dietary supplements. This includes patients using SSRIs, serotonin modulators, tricyclics, and MAOIs. The combination could cause serotonin syndrome, a dangerous condition causing pronounced confusion, rapidly fluctuating blood pressure and heart rate, high fever, seizures, and fainting.

With both existing and new patient demand for the latest effective treatments continuing to increase, this provides an opportunity for practices to grow. With encounter time at a premium as therapist and support staff shortages are on the rise, what can help a facility scale responsibly?

Automating operational processes is a practical option. This allows therapists more billable hours available with less redundant face sheet activity. Rather than working more hours, this allows them to be more patient-active without the risk of burnout.

See how this automation works.

6.2 million Americans are currently living with Alzheimer’s. That number’s projected to double within the next three decades. National Alzheimer's...

Movember’s founders and participants have discovered a whimsical way to impact the most devastating human crisis: suicide. It’s a fascinating way to...