When it comes to rehabilitative therapy for stroke patients, the main questions are how soon and how rigorous? Some believe it’s best to wait and start slowly. But a new study published in the Journal of Neurology, Neurosurgery, and Psychiatry suggests otherwise: Sooner and more intense is better.

The question isn’t really about the effectiveness of rehabilitative therapy, which is universally regarded as one of the best options available to stroke patients in their bid to regain lost motor function. The question is more about whether to baby them or truly put them to the test, especially in the initial stages of rehabilitation.

As it applies to the report, the difference is this:

Comparing the recovery potential of each patient to their per-week improvement rate, researchers found significantly greater success for those who received 6 hours of physical therapy per day than those who received just 20 to 30 minutes.

Likewise, their results are consistent with previous findings that the later that therapy begins following a stroke, the less effective the results of the rehabilitation. However, they observed that the benefits of receiving high-intensity therapy helped to overcome the detrimental effects of a later start.

In fact, the results demonstrate the overwhelming benefits of high-intensity — as opposed to low-intensity— rehabilitation, as well as further confirming the known advantages of initiating therapy sooner following a stroke.

'Benefits of High-Intensity Therapy Are Clear'

The study was conducted by researchers from University College London’s Queen Square Upper Limb Neurorehabilitation and the Institute for Bioengineering of Catalonia’s Rehabilitation Gaming System – and based on two independent rehabilitation studies involving 455 stroke patients who had lost some motor function in their arms.

Their findings challenge earlier studies from recent decades which promoted the benefits of starting therapy within 6 months of a stroke – and generated debate within the medical community about how the level of intensity that should be applied in therapy.

Conventional treatment guidelines in many parts of the world still advise that:

These long-standing guidelines are essentially challenged at every turn by the results of London/Catalonia studies.

“These results show us that standards of care offered by many healthcare systems should be reanalyzed,” suggests IBEC researcher Belén Rubio Ballester, the study’s first author. “While the benefits of high-intensity therapy are clear, a key question remains: How can we implement this in our healthcare systems? One potential answer is through virtual reality-based rehabilitation systems that allow patients to do therapy at home, such as those that we are developing in the SPECS group.”

The researchers predict that the patients who received high-intensity therapy would have shown even greater improvements if the duration of their program had carried on for more than 3 weeks.

“Many protocols follow a 3- to 6-month window of recovery, but we believe that it could actually be much longer than that — perhaps even years,” says Rubio Ballester.

There was a time when mothers stayed in the hospital for a week after birthing their children. Today, mothers are often discharged the day after delivering. That's the "new norm"— in much the same way that high-intensity rehabilitative therapy may become the new norm for stroke patients. Time will tell.

Watch A Snapshot of the InSync EHR for Physical Therapists, Occupational therapists, and Speech Pathologists 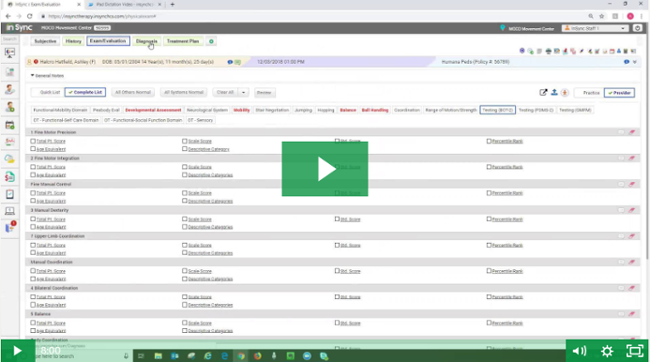 In evolving world of healthcare, there is always room for new and better ideas.

At InSync Healthcare Solutions, we are continuously changing and improving our EHR software to meet the needs of our clients in the healthcare industry.

As a  leader in physical therapy EHR software, we lighten the load of thousands of healthcare providers across all 50 states with systems designed to save you and your practice valuable time by eliminating costly inefficiencies. Developed specifically for physical therapy practices, our system includes everything from exercise libraries and exercise flowsheets to patient eligibility verification, telehealth, MIPS reporting, and more

It isn’t exactly Star Wars medical technology. There are no 2-1B droids to diagnose and treat all the ills and injuries...

Question: What are the three most cliché bits of advice given by doctors? Answer: “Take two aspirin,” “drink plenty of...

When it comes to rehabilitative therapy for stroke patients, the main questions are how soon and how rigorous? Some...